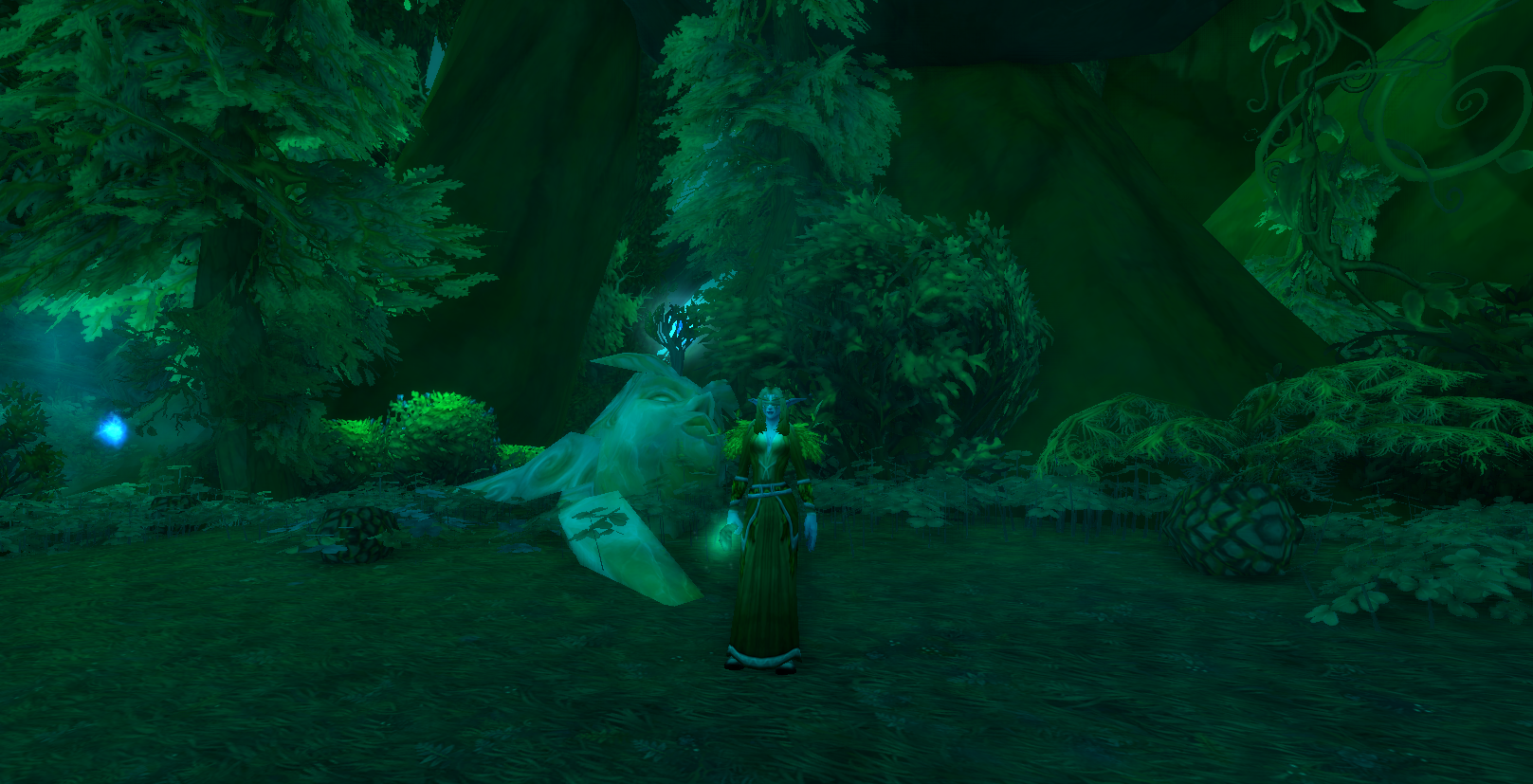 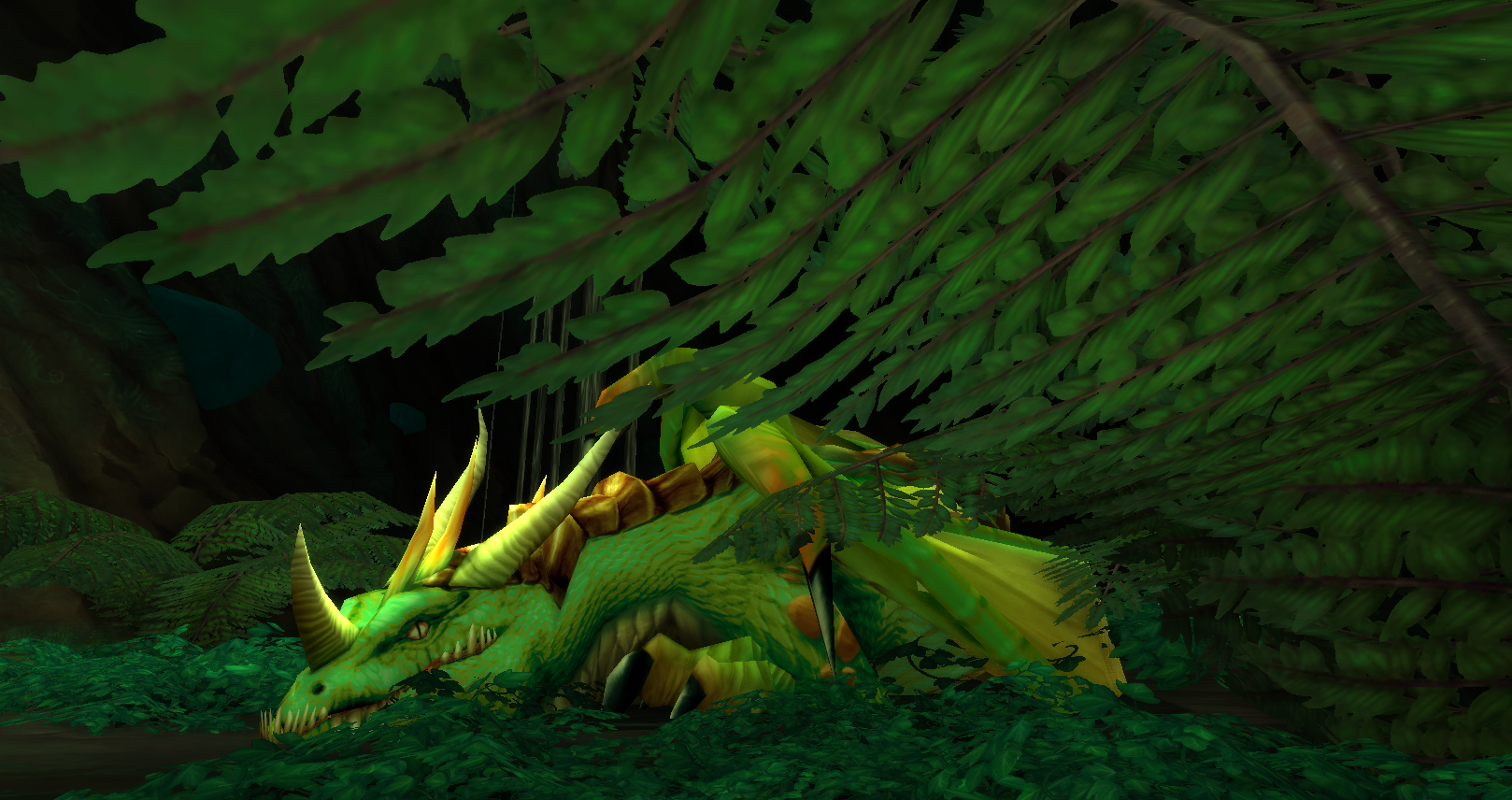 Dragonflight: Green Dragonflight
Dragon Name: Chrysanthesera
Aliases: Jadevine
Age: 1136
Gender: Female
Adulthood: Wyrm
Loyalty(-ies): The Night Elves, The Cenarion Circle
View of Heartwing: She views Heartwing as a place to find solace from Azeroth's ever stranger landscape, shelter, and purpose, which at times feels like it slips through her fingers.
Affiliations: Green Dragonflight
<br />
Attitude/Behaviour: Chrysanthesera is contemplative, retracted. Her constant habit of reflection leaves her on the verge of melancholy at times, as she feels that ever since the Cataclysm, all that she represented and held control over has begun to fade, to dilute. This does not mean she views the world as hopeless, as she tries to be as proactive as she possibly can, but she is much more about thought than action. It might take some stirring to rouse her from her usual torpor.
Key traits: Thoughtful, cautious, at times detached.
Respect for authority: Her cool-headed, contemplative demeanour makes her easy to rely on and to command. She respects authority, knowing that to disobey would be to cause disharmony, something that she vehemently abhors.
Character Personality: As previously stated, she is a fairly day-dreaming, passive individual. It is difficult to produce feelings of rage or other intense emotions from her.
One could describe her as anaesthetized with thoughts and musings, a person who can be relied on when having to address difficult choices and complicated moral matters. Asking her to take direct, instinct-driven action would be like tasking a scribe to wield a sword.
IRL-Person Personality: I'm usually a quiet person, but moods vary and at times can be talkative. I like to focus on roleplay with little OOC distraction, but I think that a few jokes here and there are healthy.
I don't view myself as causing too much trouble or conflicting with other people's view of roleplay unless it gets to a point where it bothers me, which is difficult.
Hobbies: Rune shaping, gardening, herbalism.
Occupation: Druid, Runecaster.
Future desired position:
Common spells: Hibernate - Forces a target to sleep for a set amount of time. Insect Swarm - Calls upon local insect life to swarm the target, causing harm and disorientation. Entangling Roots - Roots spring from the ground and immobilize a target for as long as she wills it.
Prestige spells: Ireroot Seeds - She throws a handful of ireroot seeds at her target, these seeds quickly sprout and grow into crushing thorns that coil around the enemy and drag them under the ground.
Backstory Summary: Hatched near the end of the Long Vigil, Chrysanthesera was raised in the mountains of Hyjal like much of her kin, which resulted in her maintaining a tight-knit relationship with the Kaldorei and the children of Cenarius, who together with the blue dragonflight stationed to the north, in Mazthoril, kept watch over the world tree Nordrassil. Ever worried of the Legion's return, that could very well have spent the last few millennia designing their next great invasion.

That day eventually came, and Azeroth's fate was once again at great risk. Had it not been for the coming of these strange new factions from across the sea, the Legion would have triumphed, and she dared not imagine what such a thing would have meant.

Although victorious, the survival of Nordrassil came at great cost. And Chrysanthesera could feel the hollow vacuum left behind by the sacrifice of the wisps every time she returned to the waking world and flew through Kalimdor's forests.
Her view of the greenskins from across the sea, despite their assistance, was not a positive one. The death of Cenarius and the tales she had heard of the horrors they inflicted upon the Red left a bitter taste in her mouth, something that would not so quickly be washed away.

The years between the Third War and the Cataclysm were not too eventful. Like all greens, she had learned of the corruption that had begun eating away at the Dream, yet she avoided action out of fear of succumbing to the very thing that she swore to fight.

It was not until the Cataclysm that she was forced to act. With Deathwing's return, Chrysanthesera knew that if she did not act now, it was very likely that there would be no other time to do so... As Azeroth would no longer be a reality.
The war proved disastrous. Treason, death, suffering and blood. Things that she had never dreamed would be possible happened right before her eyes, and in the end, after all the ordeals she had gone through, the Aspects were forced to relinquish their power, an event that irreversibly traumatized her. The loss of Dreamsight and her intimate connection to the Emerald Dream rendered her blind not only spiritually, but physically. Ever since the day that the Aspects stepped down from power, her attitude seemed to change. She became much more despondent than she used to be, much more reserved. Her trust other dragons seemed to diminish, after witnessing all the betrayal and hunger for power that had occurred in not only hers, but all of the flights. How could she even begin to trust mortals with this colossal charge when even the guardians of the world itself were capable of trading their sacred duty for such terrible power?

The following years were nothing more than isolation not only from mortals, but from the other flights as well. Travelling to and from the Dream seemed nearly impossible, and something that was taken for granted before became more foreign and distant with each and every day that passed.

At the third invasion of the Legion, she was far too jaded and bitter to make a stand. She figured that if the age of mortals had come, it was time for them to show their worth. What difference would it make if she joined the battle? Her powers were a fragment, a sliver of what they once were. Joining the frontlines would mean nothing but putting herself in danger, and losing what little she valued up until now.
She decided that there would be no fighting to be had, she would remain here, in Ashenvale, sleeping in her thicket, talking to the Dryads and playing with the wisps. Until...

The death of Ysera sent shockwaves through her mind and body. She felt the shattering of a link that she thought could never be equalled to that of the Dream, but here she was, losing one of the last few things that gave her hope.
She wept for weeks, locked in a lethargic coma. But she survived, and when she finally gathered the strength to pull herself together, she set out in frantic search for a place where she could fight. Where she could make a difference. Where her actions would actually matter.

Heartwing.
First time at dragon roleplay? I have experience as a dragon roleplayer.
(IC) Reason to join: The need to make a difference after a lifetime of inaction, of refraining from helping, of thinking that not interfering is the best course of action.
(OOC) Reason to join: I'm currently in another guild, but sadly there are only hosts on Weekends. I'm looking for another guild that could sort of give me something to focus on from time to time.
Are you aware of the guild rules, the content of the Tome of Ancient Times forum and the lore of your dragonflight?: Yes.
Have you understood current timeline of Heartwing?: Yes.
Do you fully understand the lore of your dragonflight, and other essential lore information: Yes.
<br />
Top

Attitude/Behaviour: Chrysanthesera is contemplative, retracted. Her constant habit of reflection leaves her on the verge of melancholy at times, as she feels that ever since the Cataclysm, all that she represented and held control over has begun to fade, to dilute. This does not mean she views the world as hopeless, as she tries to be as proactive as she possibly can, but she is much more about thought than action. It might take some stirring to rouse her from her usual torpor.


Very well described. This is one of the best attitudes/behaviour I have read in a long while!


You left this one out on purpose. Does your character have no aspirations or anywhere where they want to go in life?

(OOC) Reason to join: I'm currently in another guild, but sadly there are only hosts on Weekends. I'm looking for another guild that could sort of give me something to focus on from time to time.

Heartwing's events usually are always on the weekends as well. Our events can vary from taking a few hours to taking quite a few. I hope this does not overlap and make you unable to join. We do as well have assignments that could be hosted outside the weekend, but these does not happen regularly yet, but is an aspiration we try to make.


It is my pleasure to inform you that your character has been accepted.

Please contact the administration by adding us on Discord at (Goose#3297 (Ofek), Ritual#9682 (Imani) or Jes#0001 (me)), this will give you an invite to our Discord and also then coordinate a point in which we can invite you to the guild in-game.

Thank you for your time in applying to Heartwing.

Users browsing this forum: No registered users and 8 guests