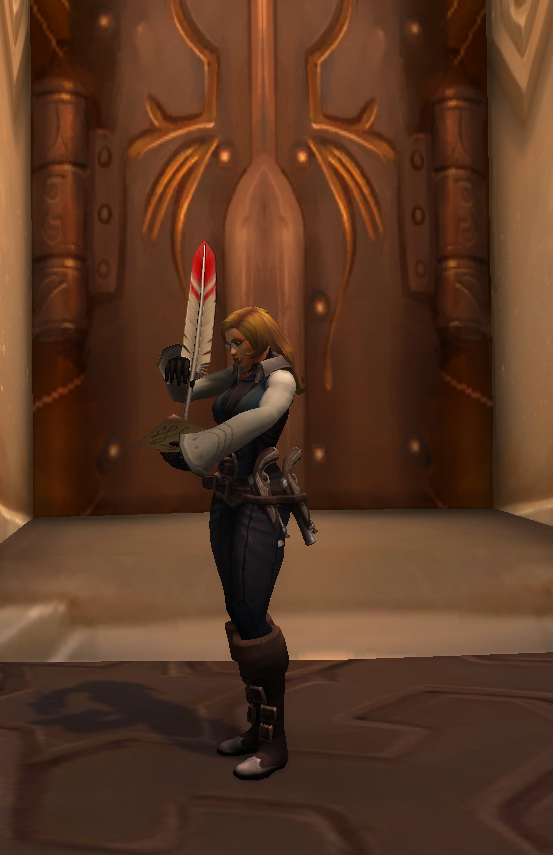 -Your character's view of Heartwing:

The "Heartwing" organisation is seen by Paradormi as an opportunity to get three for one:
Her first purpose is to simply protect herself. Only two people among the mortals knows her true identity and her current activity among them isolates her from the other dragons. She feels sometimes weak in her loneliness as well as she is sometimes worrying about her mind, scared about her becoming infinite.
The second aim is to bring a more or less formal relation for her mortal association "R&M Company" which brings (inter alia) financial and physical help for other Legionfall's orders to stop the Burning Legion, with dragons in order to help them as well as to trade with them.
Finally, her third objective is to support the unity of all. She is well positioned to know that the best chances to be victorious of wars and battles is to remain together, mortals and mortals, dragons and dragons, mortals and dragons.

As Priscille Readyne, she is careful about her appearance and she is often thinking on things, in the clouds. Nonetheless she remains open and sociable, smiling without second thoughts. As Paradormi, she's more active. She shows sometimes signs of impatience and unleashes her fury when she deals with her enemies, full of adrenalin.

Paradormi is really picky about the authority. She is not of the one who follow foolishly the orders but think about them and if she find something wrong about them in relation to her principes or her line of thought, she will talk about it with the superior even if tensions can rise. Otherwise she is very serious about her work and about her orders and will use her mind to fulfill them.

Paradormi seems to be cold and mechanical at first sight. And she is indeed about schedules, about what is planned and what has to be planned. She anticipates the future with present acts then she seems like this. But in her mechanical way to anticipate the world, she has a beating heart for her duty to protect the time, for the one who are close to her, for her will for unity. In some moments, she can be overtaken by her feelings, anger or love, fear or joy, sadness or devotion.

-Describe your own personality: I am rigorous, adaptive and I am capable to work under pressure. Hey, that's what I put in my CVs. Otherwise I am calm and open-minded, not the kind of guy making trouble. Moreover I am a solution searcher for lots of things, loving to find compromises and to speak in debates.

She is generally jack-of-all-trades, she has basic knowledge about a lot of things. But what she loves to understand and to practice is engineering, particularly, she has made her proper pistol and she does some research to improve it.

She is most of the time in Dalaran, doing some research or writing some reports for her work as archivist in Dalaran. She is also member of a private association of mortals named "R&M Company" where she debates and thinks about decisions to do in the association. Basically, the aim of this association is to help the world against the threats in a financial and discreet way. Among these activities, with the help of her association, she hunts down big fishes of manipulation of time.

-What is a future desired position of your character within Heartwing?:

Paradormi anticipates herself as an emissary of the order with mortals or perhaps other dragons. She wants to be a messenger or a decision maker, in any case, she wants to invest herself with her mind in order to occupate it and to make the world better.

"Sand breath": The powerful breath of her kind is powerful against her enemies and apparently have healing capacities. (lost the reference)

"Sand protection": She protects her skin and other's one with sand she controls in order to be a shield against physical attacks.

-Special/prestige spells/abilities of your character:

The first 100 years of life are not exciting for a bronze drake. She hatched in the sanctum of her kind and her aim was basically to work in different timelines to prevent them to be destroyed and to cause snowball effects. She was very serious in her work though she took the bad habit to work alone.
When the Infinites appeared, she was really worrying about this case and she decides to change her way to work and to get closer of the mortals. A Bronze colleague networked her with a discreet mortal co-worker about time: Miss Marie Readyne. Marie taught a lot of things to Paradormi, particularly about the psychology of the mortals, the rhetoric, and the caution, in order she can introduce herself properly in the world of the mortals. In parallel of her activities to stop the Infinities, she took the alias "Priscille Readyne" and studied properly the current history and the mortals.
During the war of Northrend, she entered in Dalaran as a citizen and as an archivist and continued to mix her duties for her flight and her activities among the mortals.
During the Cataclysm, Marie Readyne and her old associate, Angus Mallory, create with Paradormi the "R&M Company" which aimed to protect the world against the threats in a financial and physical way. The purpose of the company is to remain as discreet and efficient as possible. She introduced in the company the hunt of time-breakers and the three worked hard in their aims. The company is known to have helped Ravenholdt and indirectly Wrathion to process in the assassination of corrupted black dragons and the protection of the Black Prince.
During the discovery of Pandaria, she moved away from the Black Prince's history and approached the Lorewalkers as a defender of knowledge and a company's representative and she helped them to retrieve knowledge of the past as well as she learned of pandaren's history.
During the Iron Horde's invasion, she participated as a Kirin Tor vanguard, informally to investigate the Kairozdormu's betrayal and the potential followers. Finally she uses her mortal abilities (engineering, paper-pusher abilities, rifle and pistol shooting) to help them in Draenor.
Finally, Legion is here, and the R&M Company offers its aid to the different orders to fight against the Burning Legion but it is not enough for Paradormi who wants to finally approach the other dragons.


-Is this your first time at dragon roleplay, or do you have experience?: Yup. My first time.

-Have you fully read this guild's Tomes of Ancient Times forum, and are fully aware of the content of your dragonflight and the guild's rules and content?: Yes.

-Do you fully understand your dragonflight's lore, and other essential lore information: Yes.

-(OOC) What is your reason to join Heartwing: I have never done RP dragon before and I am very curious about it, moreover you seems to be really serious and heart-taking your project which is something I respect a lot.
Top

-Your character's view of Heartwing: ...

I find this a very good example of a view. You have managed to set her goals that led to the desires that led to her action of seeking Heartwing out.

"Sand breath": The powerful breath of her kind is powerful against her enemies and apparently have healing capacities. (lost the reference)

Chronomancy has the capabilities to do healing, however the sand breath of the individual Bronze Dragonflight to my knowledge has never shown to be native to healing.

Can you elaborate what you mean by Azerothian Reference Frame?

Very original. I haven't heard of any that has put this much depth into a prestige ability.

She introduced in the company the hunt of time-breakers and the three worked hard in their aims. The company is known to have helped Ravenholdt and indirectly Wrathion to process in the assassination of corrupted black dragons and the protection of the Black Prince.

Wouldn't this as well aided in the deaths of red dragons at the hands of Wrathion?

Although I would love to hear more of the childhood of your character, you manage to detail every event that we require in a backstory


I am pleased to let you know that your character has been accepted into Heartwing.